Brockhampton Estate (National Trust) is historic, productive and astonishingly beautiful. At the heart of the estate lies the little moated manor house from which the land was governed until the Barneby family moved to a new Georgian mansion on the hill above. The manor became a humble farmhouse for two hundred and fifty years, but now it is the centre of attention once more, the stage on which the lives of its inhabitants are revealed.

Steeped in history, Brockhampton has witnessed many changes. Until 2014 the rear rooms in the manor house were being lived in and not open to the public. The overriding aims of the Brockhampton Revealed project focused on peeling back the layers of history to show visitors how seven centuries of occupation have shaped the building we see today. For example, the original medieval great hall had an upper floor inserted into it by the family, in order to accommodate their many children.

Brockhampton revealed invites visitors to discover more about key figures from the building’s past; you are invited to rummage in cupboards, join in games in the 17th century Parlour, or relax with a good book in the fireside comfort of the inter-war sitting room.

Come and experience the unique atmosphere of Brockhampton manor and its tranquil moat nestling in a Herefordshire valley that has changed little in hundreds of years.

Walks and Pakland
There is always more to explore at Brockhampton. The six walks which wind their way across the woods and parkland, through farms and down hidden dingles reveal the full glory of the Herefordshire countryside. For example the Carriage rides walk helps you explore the woods and take in the views from the highest point in the valley. 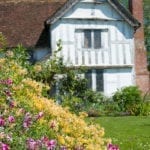